Our rating methodology recognizes two realities.  First, as fundamentally based and meaningful as the Price Target and resulting Appreciation Score are, the underlying forecasts can be “off the mark” in some cases.  Second, as important as technical measures and the Power Rating can be for a company, they can sometimes carry too far, “overshooting” warranted value, and resulting in an unusually speculative investment. 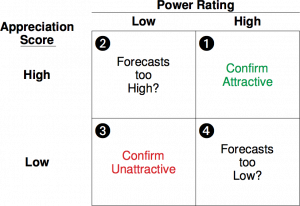 The Overall Rating separates stocks selling below warranted value into those with the potential to get “less cheap” sooner (Quadrant 1) versus those with little likelihood of a significant price move over the near to intermediate term (Quadrant 2).  PTR’s proprietary research clearly establishes that the combination of a disciplined stock valuation framework and consideration of market dynamics yields results that are superior to those derived from either approach utilized separately.

Appreciation Score.  The Appreciation Score represents the degree to which a stock is attractively priced relative to the universe.  Each company’s warranted market value — or Price Target — is derived from PTR forecasts of return on equity, long term growth, and cost of 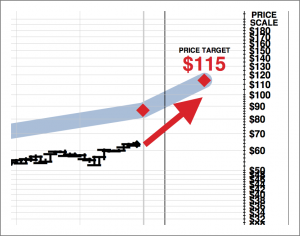 capital.  The percentage change from the stock’s current price to the Price Target is calculated and percentiled relative to the universe (0=the lowest appreciation potential; 100=highest).  In the example:

Power Rating.  The Power Rating measures the “timeliness” of a stock for purchase.  Because the Price Target, appreciation potential, and Appreciation Score are forecasts, other information is used to serve either as confirmation of the Price Target or to highlight cases in which the forecasts are not credible.  (It includes the stock’s price performance, behavior of other companies in the same industry group, and the trend in earnings’ expectations.  Percentiled relative to a universe of 8,000 companies.  0=the lowest power rating; 100=highest.)  In the case below the weak Price and Industry Scores offset the higher Earnings’ Score resulting in a mediocre Power Rating of 34.

Rating Results.  In addition to the regular publication of its stock ratings, PriceTarget Research constantly assesses how well the Overall Ratings perform over prior periods.  Performance for each rating category and the overall universe is measured over longer historical periods as well as for shorter intermediate periods with the focus on three key aspects of performance.  The first is how well the ratings discriminate between outperforming and underperforming stocks — i.e., whether high rated stocks outperform the universe and low rated stocks underperform.  The second consideration is how well-ordered this performance data is.  Well-ordered performance occurs when A-rated stocks outperform B-rated stocks that, in turn, outperform C-rated stocks, and so on.   Clearly, the most desirable outcome is for performance data to be well-ordered over the full period as well as for each individual year.  Finally, persistence of ratings is measured.  At each month end over the full historical periods, each stock’s rating is recorded and the number of subsequent months in which this initial rating was maintained calculated.  From this information, probabilites are developed that represent the likelihood that a specific rating (A, B, C, D, or F) would be maintained over future horizons.

While past performance is no guarantee of future results, the evidence continues to indicate that PTR’s Overall Rating discriminates well between stocks that outperformed and stocks that underperformed over historical time periods.  Moreover, this performance was well-ordered and consistently superior from period to period: in most years, A-rated stocks outperformed Cs and C-rated stocks outperformed Fs.  Finally, the Overall Rating provided an exploitable, persistent appraisal of relative attractiveness: the average duration of individual ratings exceeded 12 months.